Me and Mac Sledge 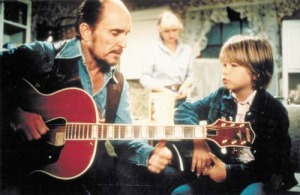 Last night, after a most bittersweet Valentine’s Day, I herded the kids to Blockbuster.  Amazingly, they had in stock my all-time fave flick, Tender Mercies, Bruce Beresford and Horton Foote’s masterpiece from 1982.  I grabbed it.

I first saw Tender Mercies when I was home from school with mono.  Cox Cable was new to Great Neck.  I spent my convalescence eating Stricoff’s cookies, cross-infecting my boyfriend, and watching Tender Mercies. When I like something, I spend time with it.  Obsessively, compulsively, call it what you want.  I learn a lot this way.  Each time I watch Tender Mercies, or read White Noise, something new happens.

For example, last night I noticed that the photos of Buddy’s dead father show his arms extended the same way.  The teenage dad in cowboy hat, the teenage solider in ‘Nam.  A flash on the screen.  A lovely, precise echo.  I also realized that Harry Silver, Dixie’s manager, is, in the tradition of handlers and impresarios, a landsman.

Tender Mercies taught me about country music.  It sent me to the Great Neck Library to read about George Jones.  I wanted to take a Greyhound to West Texas, to find Mac Sledge. Robert Duvall played Mac Sledge, the imploded country-western star ruined by drink.

He lands penniless at the Mariposa Motel, owned and operated by Rosa Lee Wadsworth (the incandescent and cantilever-jawed Tess Harper), a 28-year-old widow and single mom to Sonny.  Mac dries out, he redeems himself, he proposes to Rosa Lee while they hoe their tiny, depressing garden. Rosa Lee owns one dress.  Mac keeps a scuffed valise under the bed with all the songs he’s written since hitting the skids.

Mac Sledge leads Rosa Lee in that scooting-style country dance, the pedal steel throbbing elastic in the background.  Duvall two-stepping with slightly bowed sturdy legs, charismatic and assertive and doting, drove the 16-year-old me wild.   I could still watch him scoot all night.  That self-confident hoisting of the microphone.

Mac Sledge, alluring guitarist in the battered kitchenette, slim-hipped older man with sex appeal.  He was sexier to me than Richard Gere’s Zack Mayo, back in ’82. Mac was something else, too.

Mac and Sue Ann briefly reunited.  He’d been absent so long that she plausibly asked him if he knew her name.  “I used to call you Sister,” he said.

She asked if he remembered a song he sang when she was little — “On the wings of a snow white dove, I give you my something something love” — and he pretends to have forgotten. Sue Ann leaves, and as her soon-to-be totalled Trans Am heads to the highway, Mac sings the correct verse.

When you watch a movie a hundred times, or reread a novel so often, you can reel off paragraphs like a savant on The Learning Channel, familiarity grows. You know the characters, the punctuation.  Are they people?  Are they real?  I know Rosa Lee has a framed drawing of a skier on the wall of her simple home.  It hangs near the “Tee Vee.”  I know she serves Krispy saltines.  I realize a set decorator found the picture, the afghan, the crackers, the Tee Vee.

The fact is that Mac and Rosa Lee, or White Noise‘s Jack and Babette, are more real to me than certain acorns on my family tree.  They’ve certainly given me more pleasure and comfort.

Today, according to my calculations, Rosa Lee would be 56, Mac, 71.  I hope they’ve retired to the evangelical equivalent of Century Village.

This entry was posted in Uncategorized. Bookmark the permalink.

4 responses to “Me and Mac Sledge”